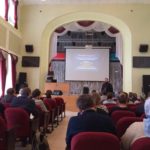 “It was like a wall was removed in front of me and now I have room to grow and a path to follow. Please consider yourself invited to speak at our City Youth Center next time you are back in Russia,”  wrote a young man after attending a FaithSearch Discovery event in Ivanovo, 250 kilometers northeast of Moscow.

Their House of Nationalities city hall was not quite full, at which the hosting church expressed their disappointment. I was, on the other hand, very happy I didn’t have to use a microphone: the natural voice usually sounds more relaxing and inviting and brings more questions at the end. Ivanovo is known to be the first city in Russia to accept the Soviet power 100 years ago, but the people never ceased seeking the truth of God there. I was happy to destroy some walls of prejudice and barriers of ignorance for them. 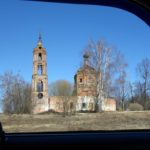 My presentation there took place on the day when a terrorist blew himself up in the St. Petersburg subway (two days after I left St. Pete). It was a sad day for Ivanovo as well, because a huge furniture factory in the city burned to the ground taking the lives of two firefighters. I was preparing myself to face the most difficult of all questions to be asked at the Q&A session: “Where is your God in such moments?” It was never asked and I only realized why on the next morning – I used the word “sobytie” (“event”) a number of times in this presentation and, for the first time, just for emphasis, I moved an accent to the last syllable: so-bytiE (“co-existance”). God was and is present in Christ, in our humanity, in our very being – not somewhere in the clouds or in some kind of a “spiritual dimension.” He was (and is) present with those killed in the St. Petersburg subway and with the firefighters in Ivanovo! 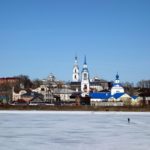 An hour and a half ride further north brought me to Kineshma, a classical, provincial, merchant town on the Volga River. Their teachers there, however, were just as sharp and on top of things as their colleagues in Moscow. Apparently they had already Googled me, and the Q&A session started with vigorous examinations of certain passages in my 1996 journal publication where I didn’t quite clearly express my thoughts on some ecclesiological topic. They also wanted to know if my presentation was reviewed and OK’ed by the Moscow Patriarchy and if I have a blessing from the local Bishop. Luckily, one of the priests came to my rescue and assured the audience that I am totally kosher, 100% legit, and properly authorized. 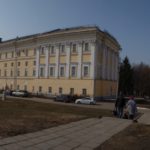 A quick, one-day stop in Vladimir, formerly the capital of Russia, was way too brief for enjoying its magnificent cathedrals and many other historic sites! A nostalgic feeling and sweet memories from the times when I was a tour guide there (back in early 80s) made my presentation to the local teachers very special. Back then, I was showing my tourist of the beauty of these churches, frescoes, and icons. Now, I was opening my audiences’ eyes to the true meaning of what and Who was depicted in this amazing art and architecture. 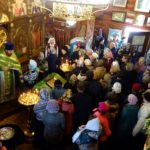 Back to St. Pete for two days of teaching at their Diocese Catechism Training Center; and then at a church in the town of Kommunar named so soon after the Communist revolution and never ever having had a church on its 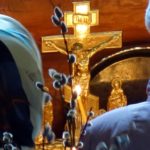 premises until just a few years ago. What a joy it was to celebrate Palm Sunday in a community of almost 200 people, some of them having to stand outside the overcrowded church building! The church is now used so intensely for their ministries – Sunday school, church choir, drama class, etc. – that they had to rent a room in the next door sauna for my presentation. Not a problem! Everybody needs a shower of biblical evidence once in while. 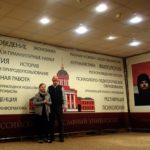 ders on the historic validity of the Bible, and then an evening lecture on the same topic at the Moscow Orthodox University for Catechism teacher, ironically, just across the street from the FSB (formerly KGB) headquarters. Again, the nostalgic note rang in my ears as I was giving this presentation in a building formerly occupied by the Museum of Moscow History, where I also used to take my tourists some, oh, thirty-five years ago! 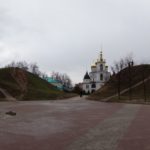 I spent a day in the city of Dmitrov, which used to defend Moscow from invasions from the north with its still very impressive bulwarks and moats. Unfortunately, it was raining all that day and I was glad to start preparing for my presentation a little early – just to get inside the City Teachers’ Union building. Teachers from all of the city were already there and we had a chance to chat and to get to know each other. As I suspected, many of them were the descendants of those intelligentsia families who were settled in this city during the Soviet times – in a 100 kilometers radius zone from Moscow. After the event, their rep insisted that I come again soon for at least a couple of days so they could drive me to the smaller towns in the area where teachers just do not have time to travel on bus to and from Dmitrov on terrible, almost non-existing roads. As a local joke goes, “There are no roads in Russia – only directions.” 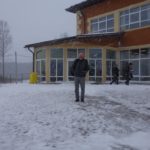 The last two days were spent in St. Pete, covered with white stuff and strong winds from the Baltic Sea. Montessori school teachers just could not believe what they were hearing – Christ rose from the dead, truly, indeed, historically, for real, historically! Their main argument was: “But it changes everything!” What can I say? Yes, it does. I am not even sure they were listening to me much through the second part of my presentation after we had established that as a historic fact. Their eyes were “looking inwards” and more at each other than at the screen. I am glad I left them with a very good local minister who will guide them from there. 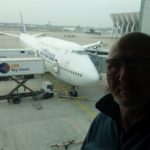 …And I landed in MN six hour before Easter! What a joy it was to sing praises to the resurrected God after sharing the evidence of this glorious event every day for three weeks in a row! Of course, my feet were still shaking and my head was still spinning through the overnight Paschal service after the thirteen-hour long flight, as faces of hundreds of people whom I met and ministered to on this trip were passing in front of me. It was a good trip and I thank you for making it happen by your prayers and your sacrificial giving!

Christ is risen! Indeed, He is risen. Truly. For real.

I don't want to be a person who does not know why I believe what I believe.  I was raised in a Chrisian home but have more doubts after graduating from a Christian College.  For many years, I have believed in Jesus because that's what people told me to do.  I appreciate this seminar as END_OF_DOCUMENT_TOKEN_TO_BE_REPLACED

Don Bierle was surprised by faith and it transformed his life!  As a skeptical researcher and teacher he was challenged to research the evidence for Jesus.  God worked and Don became convinced of the relaibility of the Bible and the truth that Jesus is the way, the truth and the life!  Surprised by Faith tells END_OF_DOCUMENT_TOKEN_TO_BE_REPLACED

FaithSearch International celebrates over forty years of proclaiming the Gospel with evidence to all peoples everywhere. Thank you for considering being a prayer and financial … END_OF_DOCUMENT_TOKEN_TO_BE_REPLACED

The mission of FaithSearch International is to "Extend the Gospel with Evidence to all peoples Everywhere." FaithSearch delivers the "Ah-ha!" moment in your church and community with an exciting, … END_OF_DOCUMENT_TOKEN_TO_BE_REPLACED