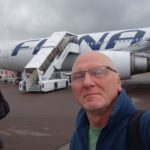 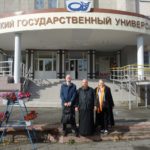 started a mere five hours after I landed in this Siberian city eleven time zones away from Minnesota. Changing four planes (SVO-ORD-HEL-SVO-OMS) and five airports made my feet shake, my head spin, and my heart beat faster from excitement. Their Theology Department was opened right after the “perestroika” (openness) era thanks to devotion and enthusiasm of its founders—Orthodox clergy, lay professors, and students. My training in presenting the Gospel with Evidence to their second and third year students gave them a chance to take a fresh look at Christian Theology, from historic perspective and from its practical, evangelistic point of view. 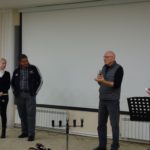 The Department Chair, fr. Aleksandr, pointed out a couple new elements which I had added to my presentation since I taught it to his studentsfive years ago: “You probably have so much more material that we allow you to present in just a couple of academic hours! Please, let us set you up for at least a couple of full days of lectures next time you are in town.” I promised him to be back in Omsk as soon as my travel schedule permits it but, realistically, it will not be until another generation of his students fills his classrooms.

A dash across the city, and I was quickly presenting in front of more than a hundred Omsk State Politechnical University students. A third of them apparently had no interest of being there and were not too shy to demonstrate this to me—they inhabited the back seats of the huge auditorium and kept whispering to each other through my whole lecture. 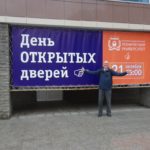 I was not quite happy with this school ethic, but my hosts seem to be very comfortable and fine with it. “Please, use the microphone and let them be. We always lecture to only the first rows and let the students to decide where they want to seat.” I spoke a little louder and chose a little faster pace this time in order to keep the other two thirds of the audience with me and not to get distracted by so called “Kamchatka” (back rows). Many of them came down and thanked me for the presentation after the class and their professor also seemed very satisfied: “I watched their faces as you were going from ‘Discovery’ to ‘Discovery’ – they didn’t miss anything and I am looking forward to hearing their questions in our next class”.

Day two in Omsk granted me an opportunity to present FaithSearch Discovery at an Orthodox youth group, where they invited their non-believing friends and peers. It was followed by an informal discussion and sharing time around the tea table. The most important words were said and heard while we were already about to leave the building as I was putting away my projector and cords.

At this age, kids are apparently a little shy to express their deep heart feelings and personal thoughts in front of their friends and were later saying to me one-on-one: “I am so glad I came tonight. I will now know the answers I have been looking for. At least, I know there are answers. What a joy to see all this evidence with your own eyes!”

I was, however, invited to Omsk this time by local the Baptist church community which had planned to hold a three-day youth-and-students outreach at their city universities, but were given cold shoulder. Instead, they gathered youth at the city center and I was one of their keynote speakers at the evening evangelistic event there.

All other speakers were great and came from other countries of the world, but I was the only one speaking without an interpreter. This allowed me to present material in both a more-condensed and more-fun way. Their Q&A session afterwards also showed how much the evidence and reasons for faith connected with the young minds—most of the questions from the audience were related to my presentation and topic.

Back to Moscow for four days of in-depth teaching of the “Historic Foundations of Christian Faith” at the Word of Life Church Bible College—a rare and treasured opportunity to use nearly all my material, and also to test my new slides about the most-recent archeological discoveries and publications. This time, I took even more time to dig into the topics of archeology and paleography in a more interactive and open discussion format. That allowed me to learn even more about the practical and contextual applications of our material in different audiences, from different cultural and ethnic environments. I love to learn from my students!

Good-bye, Moscow with its traffic, crowded public transportation, and busy streets! My train is taking me to Bryansk for three days of ministry in schools and churches.

The "Discovery" presentation [gives] information which totally confronts a skeptics view of what the Bible is and why they disbelieve it. This information is rarely presented in the church today and should be understood by every believer so that they may give an answer to the hope that lies within them.

This has given me reassurance in the object [of my faith].  The facts and proof solidify that my faith has been placed in the valid object, Lord Jesus Christ.

FaithSearch International celebrates over forty years of proclaiming the Gospel with evidence to all peoples everywhere. Thank you for considering being a prayer and financial … END_OF_DOCUMENT_TOKEN_TO_BE_REPLACED

The mission of FaithSearch International is to "Extend the Gospel with Evidence to all peoples Everywhere." FaithSearch delivers the "Ah-ha!" moment in your church and community with an exciting, … END_OF_DOCUMENT_TOKEN_TO_BE_REPLACED