You are here: Home / News from the Field / International Projects / 2018 May: Moscow and Siberia 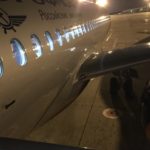 …I continued praying as I ran between the terminals and made it to the registration desk in forty-five minutes—only to hear that they cannot allow me on board because the luggage latch has already been closed and my suitcase was too heavy to qualify for a carry-on. My plane was still at the gate and still boarding but apparently I did not look like somebody they would be willing to bend their rules for. One last prayer and… I am re-booked to the flight that leaves twenty-four hours later. There is no agreement between carriers and once you bought a ticket you are stuck with that one company’s flight schedule. Oh, my dear teachers in Sargatka, I am so sorry but I cannot make it to your conference and the Omsk diocese will have to find somebody in Omsk early in the morning to travel 100 kilometers north to cover for me! 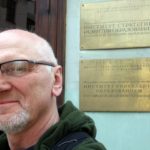 “All-powerful” Aeroflot changed my teaching schedule but not the Lord’s plans for my life. I spent this one unexpected day in Moscow visiting the university where I defended my PhD five years ago, and unexpectedly… got enrolled into the Doctorate program. In Russia, my American PhD’s equivalent is only a “doctoral candidate.” To become a “real” Doctor in Russia, I will need to do another major research project and write (and defend) a 500-page thesis.

This will not change my US credentials one bit, but my academic status in Russia will potentially open many more doors for teaching the Truth of God in universities, at academic conferences, and other public settings. My research topic will be the same as before: Christian Education in Public Schools. I felt much honored and very pleased by the fact that my university extended the invitation to me. It is a sign that Russian academia is interested in this area and is becoming more open to returning God back to schools. What a joy to be a part of this process! What an unusual way the Lord answered to my many prayers as I had been trying to catch my plane a night before! Praise Him! 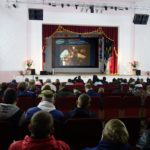 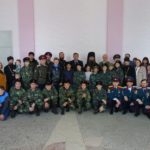 After spending two nights at the airport and in-flight, my memories of the first day in Siberia are understandably a little foggy. All I remember is a Palace of Culture in Bolsherechye, a town of about eleven thousand people, packed with youth and students from towns and villages in a 100 kilometer radius. Their eyes, their faces, their responses to the “Ah-ha! discoveries” still stand in front of me. Most of them came to that conference because they considered themselves to be Orthodox Christians, but I could clearly see it in their eyes that they have never heard or seen the Gospel presented to them as a historic reality—not just a good old tradition and church teaching. Even their teachers and church leaders seemed a little surprised by the evidence of manuscripts and archeology proving the Gospel story to be true and credible. 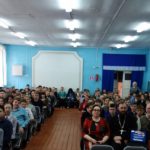 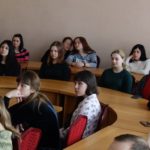 Day two presented me with an opportunity to, first, teach a class at a local public school; and then to give a lecture to future public school teachers at Tara Pedagogical University. They will soon be teaching History, Literature, and Civics in Russian schools using the curriculum entitled the “Historic Foundations of Christian Faith”—year after year, after year, after year… They will now be able not only to know the course of world history, arts, and humanities; and also to understand the meaning of it. For them, the opening question of FaithSearch Discovery—”Why I Am Here?”—will have an answer in Christ.

Don Bierle's outstanding book, Surprised by Faith, is nothing less than the crowning achievement of his life's work.  In it, he summarizes the powerful reasons why an intelligent faith in Christ is the most reasonable response to the historical evidence supporting the life, death, and resurrection of Jesus of Nazareth.  This is a book that END_OF_DOCUMENT_TOKEN_TO_BE_REPLACED

[FaithSearch] International is making a significant contribution to the body of Christ. Dr. Bierle's FaithSearch effectively evangelizes and disciples people. It has been very well received at Wooddale Church, and has added a new dimension to our evangelism ministry. I enthusiastically recommend it.

FaithSearch International celebrates over forty years of proclaiming the Gospel with evidence to all peoples everywhere. Thank you for considering being a prayer and financial … END_OF_DOCUMENT_TOKEN_TO_BE_REPLACED

The mission of FaithSearch International is to "Extend the Gospel with Evidence to all peoples Everywhere." FaithSearch delivers the "Ah-ha!" moment in your church and community with an exciting, … END_OF_DOCUMENT_TOKEN_TO_BE_REPLACED