You are here: Home / Archives for Rick Wattman 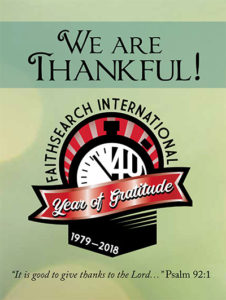 Here is what I wrote:

I’m grateful to be part of the FaithSearch team since 2001. Recently, I found an old journal from 1977, when I was exploring what to do with my life. I was caught by my use of the word “evidence,” especially given what I do today in my Gospel-with-evidence ministry at FaithSearch:

I’ve always liked to learn. I’ve been good at formal proof & argument–evidence, etc. … but how–in what capacity–Scripture? Science? How can I best use my mind to glorify God? … I pray for knowledge of & the desire to seek out the way God wants me to go.

That was forty years ago, even as FaithSearch was being born across the country. I studied journalism, worked in television, advertising, computers, Internet, and ministry. Now I am grateful to be here, where all those twists and turns are being used by God at FaithSearch, in answer to my prayers.

Almost two years ago, I wrote about the joy I share when I hear—either directly or indirectly—from people who have been impacted by our ministry and the resources we produce (see “Sharing in the Joy!“, from March 1, 2013). I have recently been blessed again to hear some amazing accounts. One reader wrote, “I read as though I was trying to quench a thirst I never knew I had.”

His story starts out like a love story, yet you may not be “surprised” how it ends.  END_OF_DOCUMENT_TOKEN_TO_BE_REPLACED

We are once again planning the details for our 2015 Benefit Dinner and Silent Auction. It will be held May 2, at Grace Church in Eden Prairie, MN. If you will be in the Twin Cities at that time, I encourage you to plan to attend. Here’s a good reason to make a reservation:  END_OF_DOCUMENT_TOKEN_TO_BE_REPLACED

It is wonderful to be loved. My wife loves me, and it is a wonderful blessing. A gift from her is always a gift of love that keeps on giving.

She has observed on numerous occasions that I practically melt when I hear wind chimes. As an example, a couple of summers ago we were dashing through a garden shop to pick up some bedding plants for her garden, and I was arrested by a display of several wind chimes of varying sizes and shapes. She patiently stood by while I played with them and sampled their sounds. She didn’t attempt to discourage me or hurry me. She even feigned interest by asking which one I liked most.

Then we continued on to the bedding plants.

Imagine my astonishment when—months later on my birthday—I opened a set of chimes which she had secretly ordered and kept hidden. WOW! Not only had she remembered the model I favored in the store; she also researched them online and found a less expensive source, AND had them delivered in time for my birthday celebration. I had been clueless about her scheme, and was truly amazed at its revelation. END_OF_DOCUMENT_TOKEN_TO_BE_REPLACED

“Like Us on Facebook!” It’s an almost ubiquitous tagline for marketing and social networking. “Everybody’s” doing it. “Word-of-mouth” has taken on new meaning as people share with others their online preferences and discoveries. “Going viral” has become the new gold standard for success in marketing. This powerful strategy is coming into play in ministry as well, and in the coming months, FaithSearch will be testing these waters. You can play an important role in helping us reach even more people with the Gospel with evidence. END_OF_DOCUMENT_TOKEN_TO_BE_REPLACED

[FaithSearch] International is making a significant contribution to the body of Christ. Dr. Bierle's FaithSearch effectively evangelizes and disciples people. It has been very well received at Wooddale Church, and has added a new dimension to our evangelism ministry. I enthusiastically recommend it.

FaithSearch International celebrates over forty years of proclaiming the Gospel with evidence to all peoples everywhere. Thank you for all your support and interest in our ministry. … END_OF_DOCUMENT_TOKEN_TO_BE_REPLACED

﻿ The mission of FaithSearch International is to "proclaim the Gospel with evidence to all peoples everywhere." FaithSearch delivers the "Ah-ha!" moment in your church and community with an … END_OF_DOCUMENT_TOKEN_TO_BE_REPLACED