If a person is inclined to “want” an error to be found in the Gospel accounts, in order to justify their unbelief, they will find opportunities to claim such exist. In this case they are usually not interested in hearing logical and reasonable explanations which could resolve the difficulty. Their position is, “Don’t confuse me with the facts, my mind is made up!”

There are apparent difficulties, as seen in variations among the eyewitness accounts. However, the writers of the New Testament, with their solid record of integrity and historical reliability, deserve enough respect to give them the benefit of the doubt when information to resolve every difficulty is lacking. This is especially true in view of the fact that many apparent contradictions which were claimed by critics 100 years ago, have since been resolved or eliminated by new understanding as a result of the discovery of external evidence, such as ancient manuscripts and archaeological artifacts. END_OF_DOCUMENT_TOKEN_TO_BE_REPLACED 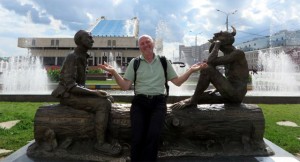 For some reason, I thought my summer trip would be a little more relaxed and not as densely packed as my usual ones during the academic year. After all, there are no class schedules to fit in, and no teachers’ conferences to get to on time. It almost sounded like a vacation: youth camp in Izhevsk; church camp in Yekaterinburg; Sunday School teachers’ training in Kazan.

From experience I also knew that about 10% of those will be cancelled at the last moment for some completely unpredictable reason—like a pastor’s vacation, a state holiday, or some other annual event nobody thought of before. Each trip schedule is  a l w a y s  tentative and is subject to change and adjustment, right up to the last moment. I constantly have to keep confirming each event up to the very day, even (especially?) when it was scheduled to happen six months before.

END_OF_DOCUMENT_TOKEN_TO_BE_REPLACED

This is the second time I have been through this material and I learn something new each time.  I have shared at my workplace and am bringing three individuals the Surprised by Faith book.  Thank you so much for sharing.

FaithSearch International celebrates over forty years of proclaiming the Gospel with evidence to all peoples everywhere. Thank you for considering being a prayer and financial … END_OF_DOCUMENT_TOKEN_TO_BE_REPLACED

The mission of FaithSearch International is to "Extend the Gospel with Evidence to all peoples Everywhere." FaithSearch delivers the "Ah-ha!" moment in your church and community with an exciting, … END_OF_DOCUMENT_TOKEN_TO_BE_REPLACED