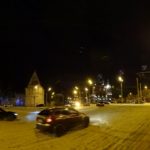 The city of Yaroslavl in December is so different from the same place in September when I was here last time! I actually cannot see much of it as the snow keeps falling all day and piles of it are waist high in some places. It slows down the traffic but— 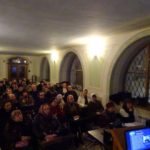 not the pedestrians! People seem to move even faster covering their faces from the blizzard – it is minus 18 C (0 F) outside. My hosts here, however, didn’t worry about the evening event attendance. Fr. Pavel, the Diocese Missions Department Chair, was confident the classroom will be full tonight and his only concern was that the participants would not freeze there. All I can do is to make my presentation as energetic and inspiring as possible – I also need to stay warm in this 18th century church basement. END_OF_DOCUMENT_TOKEN_TO_BE_REPLACED 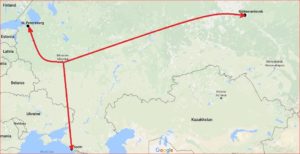 I am leaving for Russia early in the morning after the Thanksgiving Day. I cannot think of any better way to celebrate it than by giving back to His ministry some of my time and energy He granted me. This year, I am especially grateful to the Lord for allowing me to spend the Thanksgiving holiday with my family in Minnesota.

I usually have to time my trips to the Russia school calendar: not too close to the end of the fall semester and the week of finals. This time I managed to push it up far enough to be able to still teach in schools and universities, yet also enjoy the sweet time around the family table. Praise the Lord!

And while we are on it, one more prayer right away – for the safety of my travel. 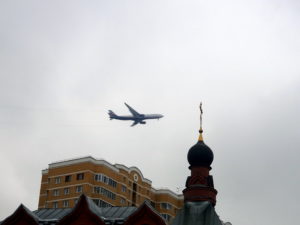 For whatever reason, Delta’s prices this season are, well, unreasonable and I will be flying Aeroflot and other smaller Russian airlines. ‘Nuf said.

My journey will begin and end in Moscow. Because it is the only (!) hub airport for the whole country, I will be spending lots of time in and around the three Moscow airports (they are about to open a fourth one). On this trip my flights will take me as far North as St. Petersburg on Baltic Sea and as far South as Sochi on the Black Sea. I will also teach in Nizhnevartovsk, which is a “gas’n’oil capital” of Russia and is located only 300 miles south of the Kara Sea (Arctic Ocean).

Some people were wondering why am I going so far north in winter. My experience has taught me always to listen to and carefully fallow what my local friends tell me. My friends from Northern Siberia said, “Do not come in the summer because of bugs and mosquitoes, and do not come in the fall or spring because the roads built on permafrost become muddy.” That only left me with one season to choose from. I hate mosquitoes. I love your prayers and interest in my ministry. 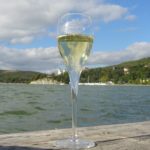 What a contrast between Yaroslavl’s gloomy autumn skies and the Black Sea shore shining in the sun! Between my two presentations in Anapa’s popular cafés, there was plenty of time to enjoy the countryside covered by vineyards and the scenic views of the Caucasus Mountains on the one side and the sea on the other. 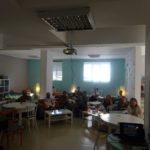 My hosts moved there a few years ago from Siberia and were still excited about being able to sunbathe in early October. They were a bit disappointed and even tried to apologize to me, when attendance at both events was below their expectations. I was not disappointed at all as this is usually the case in the city where nobody has heard of our ministry. On the contrary, I am pretty confident we can start planning my next visit there some time soon as the word gets out into the church and teachers’ community.

An overnight bus took me straight to the border with Abkhazia but I had walk across the bridge separating it from Russia on foot with my suitcase and a backpack. A pastor from Sukhum picked me up on the other side after I passed the border checkpoint and passport control. Abkazian cars have to pay huge tariffs for driving in Russia and not many people can afford it. 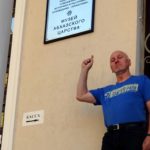 My first destination point on the Abkhazian side was an Orthodox monastery that is now one of the outposts in the battle of bringing this formerly Christian nation back to its roots after several decades of Soviet era atheism and paganism. Abkhazia is known to have sent their bishop representative to the First Ecumenical Council in 325 AD after being a common exile location for many Christian of the first couple of centuries A.D. What a privilege it was for me to continue the work of the first of the apostles of Christ in this land! 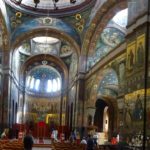 This time, however, I was a little disappointed seeing only thirty out of a hundred people staying for my lecture after the Liturgy. The abbot smiled: “The rest of the people are just tourists and their buses are waiting for them outside the gates to take them further down their sightseeing route. We are grateful that most of the come for the service and it is our task to introduce them to the Lord during the Liturgy through reading and preaching from the Scripture, praying and singing hymns. It is your job now to teach those who wanted to know more, who are looking for the truth of the Word and asking difficult questions.” He also comforted me later that day by sending me a link to their Facebook page were the recording of my presentation has already been viewed 849 times and commented on in the most positive way. 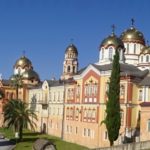 Interestingly, the History Department of Abkhazia State University, being so proud of their country’s role in the ancient history of Christianity, does not teach their students much of anything of Christ Himself. When I pointed it out to their dean and suggested that I can help the fill that gap, the conference room could not accommodate every student and professor who wanted to attend my three-hour-long session. 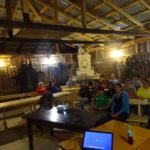 Later that same day, a winding mountain road led me to a sanatorium for children with cerebral palsy where I had a privilege of teaching FaithSearch Discovery to a group of their parents and the volunteers from the local Church. Naturally, I spent much less time on New Testament archeology and paleography with them than I did in the university setting. The

realty of Christ’s life, teaching, death, and resurrection, however, was presented to them with the same clarity and persuasiveness. Many of them shared their stories afterwards of how difficult it sometimes is for them to hold to their faith when the culture around them keeps sticking it to them by saying “how unfair  their God is.” They thanked us for giving them a solid foundation on which to defend those attacks.

Last but not least! Right before leaving Abkhazia I recorded a seventy-five-minutes-long video of the FaithSearch Discovery presentation for their national, number one TV channel. It will air for the first time in November and will be seen by the whole country. 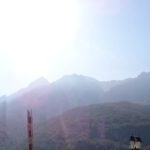 Only one day was left for me to enjoy beautiful Sochi and to visit those truly amazing sports and accommodations facilities which were built for the Winter Olympics in 2014. I was truly impressed by the scale of this whole project. My presentation to a regional pastors’ retreat was held in a hotel facing the downhill 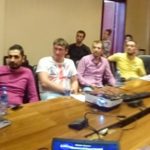 skiing area, while chair lifts and gondolas were going up and down the slope. Luckily for my hosts there was no snow on the mountainside yet, and I was fully able to concentrate on my presentation.

I am back in Moscow now with four more days of teaching here – two session each day, in separate locations, sometimes three hours apart. Your prayers for my energy levels will be greatly appreciated. 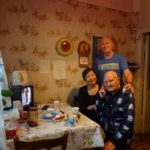 My uncle (who is also my God-father) Iosaf turned 100 years old on my first day in Moscow. It was by his prayers and by his faith in me that I was saved. Only God saves but He uses people like my God-parents (aunt Maria past away last year two weeks short of her 102nd birthday) to make this miracle happen. What a joy it is to celebrate a century-long life of our family “patriarch”! And what a spirit-booster for me to start a teaching tour in Russia! 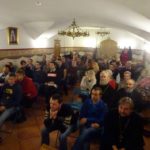 It began on the very next day in a church outside of Moscow where I have already presented – twice! Every time I am there, they find and recruit more clergy, lay leaders, and Sunday school teachers in neighboring parishes to bring in for the training. “We have already seen how empowering and encouraging is your presentation for everybody who attended the training. They just run with it. They share it in whatever setting they serve in – their churches, ministries, families, neighborhoods, schools, etc. Thank you for not getting tired of coming here time and time again. We will have a new group for you by the spring time,” said the facilitator. END_OF_DOCUMENT_TOKEN_TO_BE_REPLACED 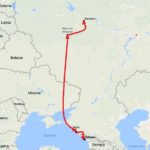 It has been an unusually long (4 months!) gap between my last trip to Russia and this upcoming one. I can’t wait to see my audiences – teachers, students, seminarians, general public – again and to present to them my updated version of FaithSearch Discovery with some new materials I just added there! As always, the trip will be about three weeks long and will give me a chance to teach at Bible colleges, churches, public universities and city teachers’ training centers.

Hopefully my partnership with Christian organizations will not suffer from the recent and most restrictive law in terms of religious freedoms that was passed in Russia just a couple months ago. In any case, my connections with secular schools and educational institutions in the country should give me plenty of opportunities to continue sharing the Gospel with Evidence all over the place.

Along with Central Russia regions, I will be teaching in Southern Russia (Sochi) and in the Republic of Abkhazia with significant Muslim and native religions presence.

Thank you for your continuing support of my family and my ministry!

(PS. My prior trip entries and photos are being transferred onto a new server and will be available again soon)

[This presentation has] given me greater ability to share the historical facts backing up the accuracy of Scripture and divinity of Jesus.

Don Bierle's outstanding book, Surprised by Faith, is nothing less than the crowning achievement of his life's work.  In it, he summarizes the powerful reasons why an intelligent faith in Christ is the most reasonable response to the historical evidence supporting the life, death, and resurrection of Jesus of Nazareth.  This is a book that END_OF_DOCUMENT_TOKEN_TO_BE_REPLACED

FaithSearch International celebrates over forty years of proclaiming the Gospel with evidence to all peoples everywhere. Thank you for considering being a prayer and financial … END_OF_DOCUMENT_TOKEN_TO_BE_REPLACED

The mission of FaithSearch International is to "Extend the Gospel with Evidence to all peoples Everywhere." FaithSearch delivers the "Ah-ha!" moment in your church and community with an exciting, … END_OF_DOCUMENT_TOKEN_TO_BE_REPLACED