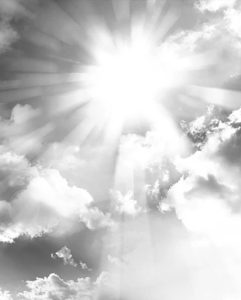 The prophet Isaiah, speaking prophetically by the Holy Spirit, declared, “The people who walk in darkness will see a great light… For a child will be born to us, a son will be given to us… And His name will be called Wonderful Counselor, Mighty God, Eternal Father, Prince of Peace” (Isaiah 9:1, 6).

The prophet Micah added that the origin of this “light” is “from the days of eternity” (Micah 5:2).

A major problem exists in the history of humanity and for every religion on earth: God is not knowable. The Gospel writer, the apostle John, states that “No one has ever seen God at any time…” (John 1:18). The evidence from nature has persuaded most of humanity THAT a supreme being must exist (Psalm 19:1-4; Romans 1:18-20) but since they can’t see, hear, or touch this supreme being, they couldn’t know WHO God is.

As a result, all the world’s religions have concluded that God is distant, abstract, and not knowable. Brahman of Hinduism, and Allah of Islam, cannot be described with metaphors (e.g. “good shepherd”) or any human qualities (e.g. “love”).

There is a cavernous space between “god” and man which is not humanly bridgeable.

However, in history, about 2,000 years ago, the advent of one person was announced by angels actually to be the very circle (God): “…and they shall call His name ‘Immanuel’, which translated means, ‘God with us.’”
He Himself affirmed this in His trial before the Sanhedrin, who asked Him, “‘Are you the Son of God then?’ And He said to them, ‘Yes, I am’” (Luke 22:70). The Christian claim is that the circle (infinite God) came into the triangle (finite world) in objective history.

One person, who was with Jesus throughout His ministry, later wrote: “What was from the beginning [eternity]…we have heard…we have seen…our hands handled…the Word of Life” (1 John 1:1). Jesus was that “Light” (John 8:12) prophesied years earlier. God was no longer invisible, intangible, and eternally illusive.

The historical evidence supporting this claim includes His authority over the laws of nature (Luke 8:22-25) and over death (Luke 7:11-16).

The ultimate persuasion is His resurrection from the dead (Luke 24:36-43). The tomb of Jesus was empty after three days; He appeared physically to many people for forty days after His resurrection; and the lives of Jesus’ followers were so transformed that they were willing to die a martyr’s death for their conviction of its truth. I described these evidences in detail in chapter 3 of my book, Surprised by Faith.

How do we know this record of His life is credible? The four Gospel records of His life and ministry have been demonstrated by manuscript studies and archaeological discoveries to be eyewitness accounts, transmitted accurately to us from the first century. They manifest historical reliability. In fact, they are the most credible records of antiquity! I document this conclusion in detail in chapter 2 of my book.

In my experience as a speaker throughout the U.S. for the past forty-five years, I have often been confronted by skeptics with many questions. Though their questions are legitimate and usually asked in sincerity, I invite them first to focus on the central question: “What have you done with Jesus?”

If they are not willing to address that one question and follow the evidence to its conclusion, then our discussion of their other questions becomes a frustrating chase down many “rabbit trails”!

Oxford professor, C.S. Lewis, articulated the options before us:

I am trying here to prevent anyone saying the really foolish thing that people often say about Him: “I’m ready to accept Jesus as a great moral teacher, but I don’t accept His claim to be God.” That is the one thing we must not say. A man who was merely a man and said the sort of things Jesus said would not be a great moral teacher. He would either be a lunatic—on a level with a man who says he is a poached egg—or else he would be the Devil of Hell. You must make your choice. Either this man was, and is, the Son of God; or else a madman or something worse. You can shut Him up for a fool, you can spit at Him and kill Him as a demon or you can fall at His feet and call Him Lord and God. But let us not come with any patronizing nonsense about His being a great human teacher. He has not left that open to us. He did not intend to. (Mere Christianity, pp. 55-56)

Here are two take-aways from all of this: For the person still seeking the reality of God, Jesus pointed the way: “I am the way, and the truth, and the life; no one comes to the Father, but through Me” (John 14:6).

For the Christian, Jesus pointed to our responsibility: “And you will be my witnesses, telling people about me everywhere …” (Acts 1:8, NLT).

[There is more: In the next issue of the Paraclete, I will discuss a third category of evidence for God’s existence.]

FaithSearch International celebrates over forty years of proclaiming the Gospel with evidence to all peoples everywhere. Thank you for considering being a prayer and financial … END_OF_DOCUMENT_TOKEN_TO_BE_REPLACED

The mission of FaithSearch International is to "Extend the Gospel with Evidence to all peoples Everywhere." FaithSearch delivers the "Ah-ha!" moment in your church and community with an exciting, … END_OF_DOCUMENT_TOKEN_TO_BE_REPLACED